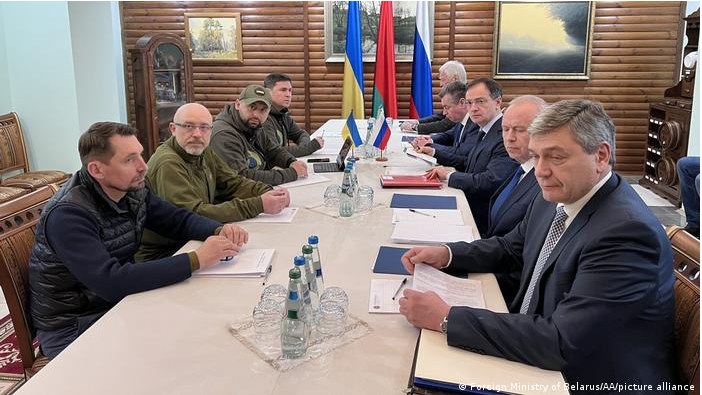 As an organization dedicated to the promotion of peacebuilding, sustainable development and cultural diversity, Cultural Diversity and Sustainable Development for Peace (CD4Peace) stresses the importance of inclusive peace talks as tools to peaceful conflict resolutions. However, we are concerned by the lack of gender representation in the latest peace negotiations between Ukraine and Russia.

The peace negotiations that recently took place in Belarus to try to find a diplomatic settlement to the Ukrainian-Russian conflict have not led to significant achievements. While massively affected by war, women and civil society have been largely excluded from these peace negotiations. At the negotiation table, women were barely represented. The grand majority of delegates aiming to negotiate a possible truce between the two countries were male. So far, three rounds of negotiations have been held, with the first negotiation taking place on 28 February in Gomel, Belarus, near the Ukrainian border. The second took place on 3 March in Brest, during which Russia declared a temporary ceasefire in the Ukrainian capital of Kiev, and the most recent on 7 March, also in Brest, during which there were minor developments regarding the establishment of humanitarian corridors. Overall, all these negotiation efforts have been dominated by military men.

However, women are not only excluded and marginalized from conflict resolution and negotiation efforts, but they are among those who suffer most from wars. This is not only a problem in present Ukraine. In most armed conflicts, women, children, the elderly, and people with disabilities are those who suffer most both from direct military exposure and from economic consequences of wars such as lack of access to healthcare, education and job opportunities. According to UN Human Rights experts, women are often victims of gender-based violence, arbitrary killings, rape and trafficking. A study conducted by UN Women on the participation of women in 31 peace negotiations between 1992 and 2011 showed that only 4% of signatories, 2.4% of chief mediators and 9% of negotiators were women. It is essential to ensure the protection and participation of women in any response to armed conflict and to recognize and value women’s perspective in all peace negotiation efforts. The needs and priorities of both men and women, as well as governments and civil society, must be incorporated in the peace negotiations in order to achieve a sustainable political settlement. A positive example of women’s participation in peace talks comes from South Sudan. During the peace process (2014-2015), a coalition of 40 women’s organizations was actively engaged in the negotiation efforts. This led to the inclusion in the final peace agreement of gender-responsive provisions such as a 35% quota for women’s representation in the new transitional government and support for rehabilitation programs for women survivors of conflict-related violence (1).

However, this approach of including women in peace negotiations and decision making does not seem to be the direction in which Russia and Ukraine are heading. This is not just a specific case but is derivative of a culture and a language in which women and feminine terms are a subjugated part of a masculine rhetoric on war and security. In his recent speech to the Russian population for the International Women’s Day, Putin addressed “the mothers, wives, sisters and fiancées of our men and officers, who are fighting to defend Russia during the special military operation” (2) asking them to be proud of their loved ones just as the whole country is proud and concerned about them. Military symbolism and language are essentially chauvinistic and a common rhetoric that portrays women not as entities on their own, but in relation to the male as a caregiver, lover or family member. Also, Ukrainian president Zelensky recently addressed Russian women in a speech, with an implicit historical reference to the role that Russian mothers had in condemning the war in Afghanistan and Chechnya. Security is often seen as a masculine concept: it is men who go to war and fight, make decisions, and sit at the negotiation table. All that is masculine is warlike and fights for a feminine objective: the motherland. Militarist discourse often uses the figure of the woman as a moral reference for war. Under these military symbolism and languages, peace often also gets assigned a feminine connotation. Soldiers fight for peace. This dichotomy between masculine and feminine persists even now that women are actively participating in the military and claiming their right to be part of the decision-making processes. Therefore, these kinds of speeches which we have seen happening in the current Ukrainian-Russia conflict, undermine the role of women in war.

In conclusion, in a culture and rhetoric in which women are relegated to a secondary role in war and security, the perception transpires when peace negotiations take place. Women have not been acknowledged as major players in war, therefore, they are not recognized as legitimate actors in the peace talks. The peace negotiations that we are seeing happening in Ukraine-Russia have been overshadowed by military men. The only feasible solution to the current conflict passes through the promotion of negotiation efforts. However, successful peace negotiations which achieve sustainable peace can only happen if all actors are involved, including civil society organizations and with an equal participation of men and women. Therefore, in order to achieve a peaceful and long lasting conflict resolution to this war, it is essential that women and civil society are offered an active role in the current peace talks.